libsureelec, a driver for Sure Electronics LCD displays 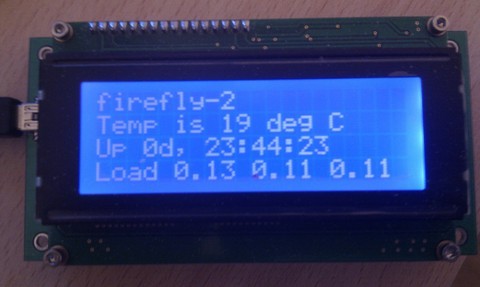 A few months ago I got a pair of 4x20 LCD displays from Sure Electronics, via eBay. Though they worked quite happily through LCDproc, I didn’t really want to use that (as I intend to use one of them on a Bifferboard). To that end, I’ve attempted to write a driver for them. Until recently I didn’t have a lot of success, which made me think that the documentation provided with the device was incorrect, until Gordon suggested trying the command set through gtkterm. I did, which made it work, and discovered that it requires the entire line to be sent to the display even if you’re only updating part of it. Adjusting my code to handle this, and add some sleep time after sending each command, made it work.

I’ve put the code on Github in case anyone else is interested. It’s able to drive my DE-LD023 device quite happily, but I suspect it should work for other 4x20 devices too. Once I add the code to detect the device features it should also work for different sized displays. Any comments or patches are of course welcome.